Maureen Jerome has fused her experience in the world of contemporary art and her business expertise to create aRTLIFEdesign, LLC, a real estate design development firm focused on the creation of artistically sensitive properties. 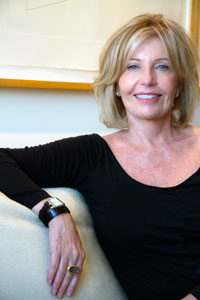 Jerome spent years working with minimalist sculptor Donald Judd, collecting his work, and becoming a friend of two decades. She credits him with training her to see in a completely different way. “ Judd took art off the wall. He broke boundaries by changing how we look at art emphasizing that the space around a work is no less important than the object itself. There should be a seamless integration between the work of art and its surroundings.” Jerome keeps this firmly in mind when beginning any building project. “The site I select, the style of architecture, the scale of the rooms, ‘the all of it’ I think of as a big sculpture that is one harmonious environment.”

When Jerome became a part-time Connecticut resident in the 1990s, she brought her artistically discriminating sensibility with her. On a farm with structures dating back to 1730, she created a home that fuses rural New England charm with contemporary urban clarity. But back in her New York apartment, Jerome found that life in the country had also influenced her experience of city space. It is possible to be in touch with the land, Jerome learned, even when you’re high above it. With several contemporary and classical projects to her credit, Jerome decided to share the lessons she had learned in the arts and business worlds to create a real estate design company focused on fusing traditional vernacular architectural styles with a modern minimalist eye. From this sensibility aRTLIFEdesign, LLC was born in 2003.

Jerome takes her cues from nature. The contours of the land, the positions of trees, streams, and other natural features, the movement of the sun — they — fuel the project’s conception. Each aRTLIFEdesign plan benefits from this acute sensitivity to place. A site is acquired only if it lends itself to a house with stirring views, strong light, gentle breezes, and access to extraordinary natural features. The house is then designed to take advantages of that bounty and to ensure that each house treads lightly on its carefully chosen site.

aRTLIFEdesign properties have been described as “sophisticated without being self-conscious, stylish without a trace of the trendy, and thoughtfully (very thoughtfully!) designed down to the last detail for living that is gracious and soul-enhancing”.

All text by Melissa Davis.